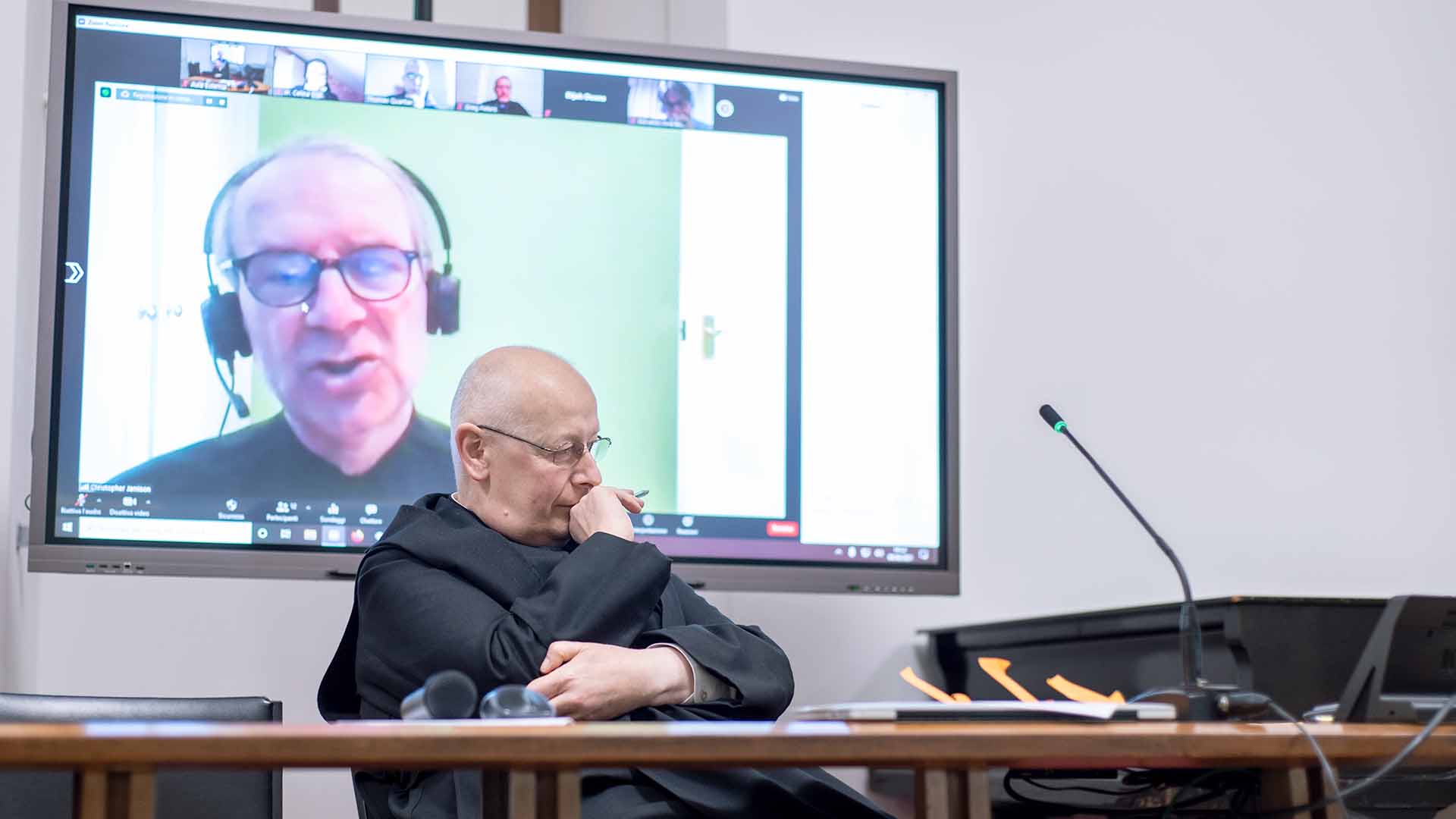 Background and objective of the Meeting

The Monastic Institute of the Faculty of Theology of the Pontifical Athenaeum Sant’Anselmo in Rome organizes an International Symposium every four years, dedicated to different themes related to monasticism.  This year the focus was on education and formation.  The problems of education are currently very relevant, for various reasons, both in the modern world and in the Church, which dedicated the last Synod of Bishops to youth, and was crowned with the post-synodal exhortation Christus vivit. The Symposium was convened from 8 to 11 of June 2021 in Rome.

The Symposium was attended by participants from various countries both online and in presence. 43 abstracts from 15 countries were made available online well in advance to facilitate the participants to go through the topics.

Fernando Rivas osb, Dean of the Faculty of Theology, welcomed the participants. The symposium began with the official keynote address of Bernhard A. Eckerstorfer osb, Rector.  His key note address on the novel theme ‘Gardens of Wisdom. Benedictine Cultures of Learning Today’ was well connected to the climatic context  in Rome as it was season of flowers in the rose garden nearby and everywhere.

Structure of the Symposium

For the flow of ideas, the thematic sessions were held parallelly in two halls. Participants were given the possibility of selecting the hall according to the themes of interest. Three papers were presented for a session. After the presentations time was given for clarifications and questions. A half an hour break followed the presentations.

Böckmann OSB, Aquinata: Spiritual abuse of power in formation – and “zeal for humiliations” (RB 58,7)? What does the Rule of Benedict (RB) emphasize in this context, seen against the Rule of the Master (RM)?

Bisogno, Gianmarco: Between ordo factitium and ordo naturalis analysis of the community character of the Anselm pedagogy.

Gushurst,-Moore André: The Benedictine Inheritance and Catholic Education for the Twenty-First Century

Scheiba OSB, Manuela: Benedict's “School for the Lord’s Service” (RB Prol 45). Reflections from the Point of View of an Iconographer

On the second day there was a Panel Discussion on: Benedictine Education: between the past and today.

Abbot Christopher dealt the theme from three points: Mental health, Information technology and Home schooling. He presented about the challenges the present pandemic has brought in the style of education. He stressed on the need of school chaplain who strengthens, who accompanies, who listens to the stresses and anxieties of the students. We need to understand what Benedict meant by ‘Listen to the master’s teaching’. He hinted at the Magisterial way of teaching and the exclusivity of monastic education.

James Clark spoke about the role of a monk as an educator. He also questioned if the students need to be present in the University at all. He brought to the notice of the participants about the medieval debate on how to be both monk and master at the same time. He also spoke about the involvement of monks in education in the middle ages citing Decreta I,II (816), Decreta II, V (817) of Benedict of Aniane. He also explained how monks have to be teachers citing different works of St. Anselm.

Clarifications and questions were given and answered.

After the coffee break the sessions resumed.

Jayasundara OSB, Araliya: Two Monastic Traditions in the Pursuit of Education: Towards a Paradigm

Wilde OSB, Mauritius: How to set the bar

After the Lunch break the sessions resumed.

Campion, Eleanor: I think of your name in the night time. Introducing the Old Testament through the Two-Year Cycle of Vigils Readings

After the Coffee Break the sessions resumed

Sawicki OSB , Bernard: From experience to performance: about some underestimated aspect of monastic formative tradition

Skillen, John: Education and Formation through Visual Art in a Benedictine monastery

Quartier OSB, Thomas: “A School for the Lord´s Service”. Ritual-liturgical Laboratories in Education

Roberto dealt with different tools to write a biography. He explained about the courses  that are offered in the University regarding how to write biographies. To introduce the participants to familiarize with some  of the tools of writing he asked them to write whatever word they wanted. Later he asked the participants to write in a sentence the answer for the question: For me to write is? Later many have expressed what they have written. He continued explaining what it is to write a biography. He underlined that the autobiography is a reality. Imagination is easy but the memory is difficult. Autobiography means our truth; it comes from our interiority. Augustine’s example was cited to show how one searches into oneself. Important tools to write the autobiography were underlined: first to remember secondly to give voice to what comes into heart and  thirdly to compose what comes. Those that with which we are occupied at different stages of life were brought to light: Infancy- games; youth-love; Maturity- work; Middle age- Witness; he explained that one need to pay attention to things, faces, objects, persons, emotions and places while writing the autobiography. The difference between self-writing, narrating and memory was  also presented.

The participants actively participated in the exercise.

After the coffee break the session resumed

Sabrina Tinghi spoke about the importance of the Word, the Breath and the Sound. She cited the example of the Creation narrative in the Bible and spoke  about the importance of the wind and the breath. The Sacred words have a special sound and are meditative. The participants were given few Hebrew words from the Bible and were given practice in pronouncing the words, singing the words meditatively and also moving the body accordingly. Excercises in meditation were taught. Participants actively participated and for a period of time were elevated in spirit and melody.

Participants were invited to attend  the concert that was programmed for that evening in the Church at 20.30. online link also was sent to all the online participants.

After the Lunch break the session resumed

A Panel Discussion was conducted in French on the topic: “Does the modern society need monks?”.

Rod Dreher: The Author of “The Benedict Option”

The moderator Isabelle Jonveaux presented the speakers. Simultaneous translation in English was made possible for the participants to follow the French talk in English.

Daniele Hervieu-Leger spoke about the Cloister and the hospitality...

Rod spoke about the crisis in America with regard to loss of faith. He opined that the  Benedictine monks can remind the people about God. When people are challenged about the purpose of life, social media and internet, the Benedictine model can help. He gave some examples of communities who were inspired by the Benedictine life. He also broght to the notice of the participants about the families who live close to the monasteries to benefit from the Liturgy celebrated in that monasteries. He informed that nearly 1000 families live this way. He expressed the desire of many families who want to educate their children in a Catholic way taking the inspiration from the Benedictines. Some monasteries allow families to use their property to live there.

Time for disucssion was given. Questions were answered by the speakers.

After the Coffee break the session resumed.

The session was for feedbacks and  reflections.

M. Van Parys, sharing his reflection on education, said that there is a teaching that is more direct. That is teaching by word and example.

Showraiah commented that the talks given by different professors from various nations on Benedictine Education and Formation are a great treasure.

The morning sessions on the fourth day:

Van Deursen-Vreeburg Juliëtte: Sacred reading and formation in secondary schools in the Netherlands. An educational model

Bini, Sergio - Bini, Stefano: Training and work, in the light of the Regula Benedicti. Effective and sustainable organizations, at the time of “Industry 4.0”

Jonveaux, Isabelle: The Role of Contemporary Monasteries in Education in Africa and Europe. Tradition and Tensions

Paganopoulos, Michelangelo: Bridging “East” and “West” in the Formation of World Christianity. A comparative ontological approach to relational monastic personhood amongst Orthodox and Benedictine Monks towards an Ecumenical Understanding of Contemporary Monastic Life in terms of Practice and Experience

After the Coffee Break the sessions resumed:

Jewdokimow, Marcin – Sadłoń, Wojciech: Communication about Gender, Intimacy, and Sexuality within the Formation

After the Lunch Break the session resumed

Most of the participants expressed their appreciation for holding the Symposium.

Following are the comments:

The programme was good but the time that was selected to conduct was not. Many students from Sant’Anselmo could not attend because of the time of exams.

Key speakers are to be selected. They need to send the full text early enough so that the participants can follow the text while the speaker is presenting.

The anthropological challenges in monastic formation today could have been addressed. Especially from the places that monks come eg. Africa, Latin America and Asia.

Some speakers were just running through the text rapidly.

At the end of the Session special thanks were expressed to Sr. Silvia for her technical service to the Symposium.